Holodomor – one of the most monstrous crimes in the history of mankind, was the result of a deliberate political strategy masterminded by Stalin and his totalitarian communist regime. By the magnitude, losses during the Holodomor surpassed those of the Ukrainian nation during the Second World War.  Ukrainians worldwide continue to suffer the consequences of this merciless act.

With the de-classification of documents in Ukraine and eyewitness accounts, the world has learned of a horrific crime against humanity about which little was previously known or officially confirmed.  The confirmation was made by Ukraine itself in its quest for historical truth and national identity.  It is a fact that the Holodomor: a) occurred; b) was deliberate, and was c) designed to destroy a nation.

Ukrainians in Alberta are united with the international community in commemorating the anniversary of the Holodomor-Genocide in Ukraine of 1932-33.  Together we can spread the truth about the Holodomor, and ensure acknowledgement of the Holodomor as an act of genocide against the Ukrainian nation. In Soviet Ukraine, the region known as Europe’s breadbasket, 7 – 10 million lives were suddenly eradicated by starvation, one of the most ruthless forms of torture and death.

View the Ukrainian Famine and Genocide (Holodomor) Memorial Day Act on the Alberta Government website or download the PDF here.

Educational resources from HERC by CIUS 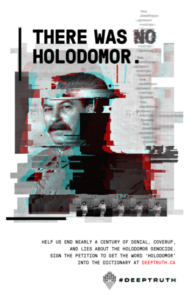 Help us get the word “Holodomor” included in most English dictionaries!

Please help us by signing the petition that will help the Ukrainian word “Holodomor” be recognized in major English dictionaries. This is important for the word “Holodomor” itself means death inflicted by starvation” or“extermination by hunger” and to this day Russia continues to deny this genocide.

Note: UCC-APC is not responsible for the quality, accuracy, reliability or currency of the information contained on external web sites; nor is the UCC-APC responsible for any service and/or product made available from an external site, despite any listing or description that may have been made on the UCC-APC website.