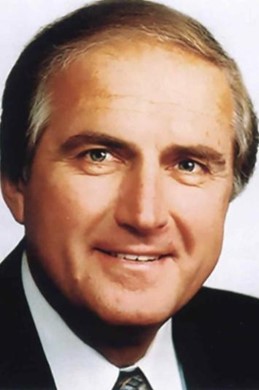 The Honourable Roy J. Romanow was born in Saskatoon on August 12, 1939, to Michael and Tekla Romanow. Roy Romanow’s early childhood consisted of being a part of the culture in his parents’ immigrant community. Thus, the first language he learned was Ukrainian. He went on to attend the University of Saskatchewan and became active in student politics, especially in the public debate.
read more

He further worked to introduce the publicly-funded medicare by the Cooperative Commonwealth Federation (CCF) government. Mr. Romanow earned an Arts degree from the University of Saskatchewan in 1960 and a Law degree in 1964. He then served in public office in Canada for over thirty years, most notably as Premier of Saskatchewan, 1991-2001, and as Deputy-Premier and Attorney General of Saskatchewan, 1971-1982.

As Saskatchewan’s Attorney General, he was involved in the federal-provincial negotiations that resulted in the Constitutional Act of 1982, including the Canadian Charter of Rights and Freedoms. In 1984, Roy Romanow coauthored Canada “Notwithstanding” about the negotiations that were involved during the drafting of the new Constitution.

Mr. Romanow served as the sole Royal Commissioner on the Future of Health Care in Canada from 2001 to 2002. His final report is entitled: “Building on Values”. 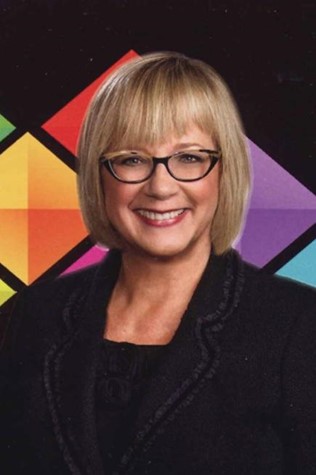 The story of Janice Sarich is deeply rooted in Ukrainian culture. Born in Edmonton in 1958, Janice is a fourth generation Ukrainian-Canadian, and a proud Albertan. This intelligent and dedicated leader is driven by strong cultural, religious, and close family upbringing. Janice’s commitment to family and education attracted her to politics, confident she could have a positive impact on children, parents, and community.

Janice put her small business-consulting firm on hold when she became the first woman elected as the Ward 2 Trustee for Edmonton Catholic School Board and held the position from 2001-2007. A strong voice with an enviable work ethic and energy, Janice moved to provincial politics in 2008. She was elected as a Member of the Legislative Assembly of Alberta (MLA) for Edmonton-Decore and was re-elected in 2012, serving until 2015.

Former Premier, Ed Stelmach, appointed Janice to a challenging Cabinet position as Parliamentary Assistant to the Minister of Education, while continuing to serve on demanding Standing Committees.

Janice is a devoted wife, mother, sister and daughter while being a strong community supporter and fixture at countless community and spiritual events.

She believes that faith is an integral part of promoting tolerance and understanding amongst Albertans. Janice greatly respects Bishop David Motiuk as a leader.

Janice is honored and humbled to accept the Michael Luchkovich Award, and joins past recipients who she has long admired and respected. She will continue to promote Ukrainian culture and traditions as she continues to write chapters to her story. 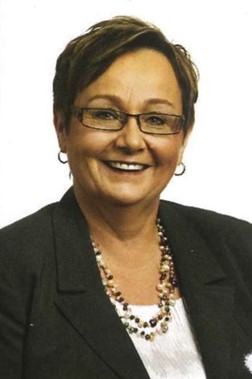 Genia Leskiw is the daughter of Ukrainian Immigrants. In Junior and Senior High School Genia was very active in the life of her school, holding different positions on Students’ Union. In grade 9, she was awarded the Citizenship Award, and in Grade 12 was nominated for the Percy Page Award for her contribution to the Students’ Union.

When Genia became a teacher she was actively involved in her Teaching profession holding various positions on her local ATA executive. She most enjoyed being the spokes person for her fellow colleagues bring change to the classroom and working conditions.

After moving to Bonnyville, Genia became involved in her church and Ukrainian Community. She held various executive positions for her Church ladies’ group and eventually became the president of her church. She also helped run the Kiev’s-K-Hi Ukrainian Youth camp for 25 years.

In addition to serving as Deputy Chair on the Premier’s Council on the Status of Persons with Disabilities, Genia also served as a member of the Privileges and Elections, Standing Orders and Printing Committee and the Special Standing Committee on Member’s Services. She also chaired PC on Education. Served as a member of ACAUR-Advisory Council of Alberta-Ukraine Relations for 12 years. In her last three years, she was given the honour to chair this committee.

As an MLA, Genia had the opportunity to attend many Canadian Women’s Parliamentarian Conferences in Canada. She also had the privilege to represent Alberta in Nairobi, Kenya at the International CommonweaIth Parliamentarian Conference at the women sessions. One outstanding memory in her life as an MLA was organizing two Aboriginal Showcases in Bonnyville and Cold Lake showcasing beautiful Aboriginal cultures in the area.

As for her active involvement in her local community and the Ukrainian community in the province, Genia was awarded with the Alberta Centennial Medal and the Queen Elizabeth Diamond Jubilee Medal.

In her retirement from teaching and politics Genia has returned to being active in her church. She had the opportunity to judge 4-H public speaking and she makes herself available to help Ukrainian immigrant women in her community with their English and being available when they require a helping hand.

Genia has been married to Ron Leskiw for 42 years and makes Bonnyille her home. They have two beautiful children David and Lynna. 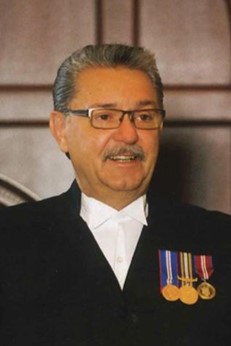 Gene Zwozdesky was born on July 24, 1948 in Nipawin Saskatchewan. He moved to Alberta at the age of two, and his family lived in the communities of Grand Centre, Hinton, and Sangudo before finally settling in Edmonton when Zwozdesky was 15 years old. Prior to entering politics, Zwozdesky worked as a music educator, and a business owner.

Gene’s political highlights include writing, researching, and presenting the “Ukrainian Famine and Genocide (Holdomor) Memorial Day Act” Bill which passed all three Readings in one day and became only the second Bill in Alberta’s history

to do so. In recognition of this historical Act, Gene received the Order of Ukraine Medal from the Government of Ukraine, and the Shevchenko Medal from the Ukrainian Canadian Congress. Gene Zwozdesky’s political career was capped-off by becoming Speaker of the Alberta Legislative Assembly from 2012 to 2015.

In addition to his countless political contributions, Zwozdesky has been extensively involved in promoting Ukrainian culture throughout his lifetime. In 1963, he joined the Ukrainian Shumka Dancers where he danced, served as President, co-Artistic Director, and then, for 25 years, the group’s Music Director. Other dance groups that Zwozdesky was involved with include Cheremosh, Rusalka, Tryzub, and Yevshan.

He was also conductor of the CYMK Ukrainian Youth Choir for several years, and is currently a member of St. John’s Ukrainian Orthodox Cathedral Choir and of the Ukrainian Male Chorus of Edmonton, for whom he composed “That Old Sheepskin Coat” to lyrics written by his mother, Anna. In appreciation of Gene’s musical contributions, he was inducted into CFCW’s Ukrainian Music Hall of Fame. In 1991-92, Gene was the Executive Director of the Alberta Ukrainian Centennial Commission and concurrently Executive Producer of the 100th (National) Anniversary Celebration of Ukrainian Settlement in Canada. 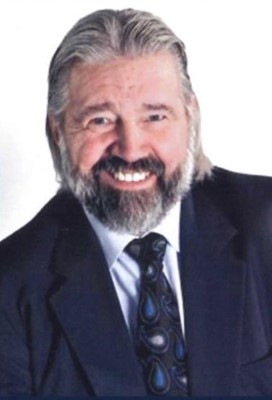 Raymond Bruce Danyluk’s Ukrainian great grandparents, Alexander (Sandy) and Nastesia Daniluk came from the Bukovina Region to settle near Willingdon, Alberta in the 1890s. Ray’s grandfather, Peter Danyluk, was born near Whitford, Alberta in 1900. Nastesia died during childbirth and Sandy died when Peter was 3 years old. To earn his keep, Peter worked on farms at young age and was not able to attend school. He farmed near Hairy Hill, married Jennie Hirka and raised a family of three sons and three daughters. In 1945 they bought 5 quarters of land and moved southwest of Elk Point to a place with an abundance of trees for firewood and the prospect of building a log house.

Ray was born on February, 22 1952 in Calgary. He grew up on the Elk Point farm under the care and guidance of his grandparents and Uncle Bill. His first language was Ukrainian, and he didn’t learn English until he began attending school in Elk Point. He studied science at the University of Alberta and married Lorraine Hodge. They purchased the farm from his uncle and cared for his grandfather until his death in 1975.

Ray’s political career began in the 1970s serving as a UGG delegate, Cattle Commission Director and President of the Rural Electrification Association. He was very involved with his three children’s activities; Ukrainian Dance, 4-H, hockey and basketball, often coaching, always cheering. Ray’s motivation to create better educational and recreational opportunities for rural children propelled him into electoral politics. He was elected as a Municipal Councilor and School Board Trustee for the County of St. Paul in 1992. He served as Reeve and as St. Paul Education Board Chair. He is proud of his work as Chair of the Amalgamation Steering Committee and of having major influence in the redesign of educational funding in support of rural students.

Ray was elected to the Alberta Legislature in 2001, representing Lac La Biche-St. Paul as MLA until 2012. Ray served under 3 Premiers and held four ministerial portfolios; including municipal affairs and housing, infrastructure and transportation. In his capacity as minister, Ray launched a sustainability initiative to provide sustainable funding for municipalities. He modernized the coordination of emergency and fire management across the province. He helped lead and support an initiative to electronically network and update Alberta libraries.

He fought to obtain funding for universities, schools, hospitals, roads, bridges and cultural facilities, including the new Royal Alberta Museum and Archives. It was a privilege for him to serve under Premier Stelmach, during a dynamic period of growth and investment in infrastructure.

In 2011, Ray was honored to receive the Lieutenant Governor’s Leadership for Active Communities Award. In 2015, the gymnasium in the Elk Point FG Miller High School was named in honor of Ray’s dedication to community and youth, promotion of sports and his great efforts to make the school modernization a reality.

During his tenure as MLA, Ray enjoyed the experience of serving as Chair of the Council on Alberta-Ukraine Relations. Unequivocally, he is proud of his Ukrainian heritage. He recognizes the cultural attributes that compose his “natura”. He supports the cause of Ukrainian Village as an educational resource showcasing Ukrainian culture, as well as agricultural heritage in Alberta.