Multiculturalism is an inherent part of the history of Canada. Our country is not a unitary nation-state: one country, one nation, one language and one culture. On the contrary, it is typically characterized by its cultural diversity. In the last thirty years, this diversity has been recognized under Federal and Provincial government policies on “multiculturalism.” Ukrainian Canadians have played a leading role in helping to define this policy.

Mr. Diefenbaker, who often remarked that he was the first Canadian prime minister whose ancestral roots lay outside both the French and Anglo-Celtic cultures, made a historic contribution to the develop­ment and understanding of multicultura­lism in 1960 when he introduced the first Canadian Bill of Rights, a document which contains many of the equality provisions now enshrined in the Canadian Charter of Rights and Freedoms.

The Canadian Folk Arts Council was created by a Ukrainian Canadian, Leon Kossar in 1964, who led it for many years. The Council allowed Canada’s ethnocultural groups to become involved in state activities on an official level for the first time.

Senator Paul Yuzyk of Manitoba was the first to introduce the concept of multi­culturalism and as such, is now con­sidered the father of Canadian Multi­culturalism. He devoted his 1964 speech in the Senate to the subject of multi­culturalism, saying in part: “In keeping with the ideals of democracy and the spirit of Confederation, Canada should accept and guarantee the principle of the part­nership of all peoples who have contri­buted to her development and progress.”

On October 8, 1971, then Prime Minister Pierre Trudeau proclaimed Canada to have an official multicultural policy. Various provinces adopted multicultural policies and legislation in the 1970’s: Manitoba in 1970; Alberta in 1972; Saskatchewan in 1974. Most recent has been British Columbia. Ukrainian Canadians played important roles in all these developments. In Alberta leadership was provided to the multicultural community by key Ukrainian leaders such as Laurence Decore and Orest Olineck, who in 1973/4 and 1987/9 chaired the government’s Alberta Cultural Heritage Council. Bill Pidruchney was chairman of the Alberta Cultural Heritage Foundation. Key activists in other provinces included: Dr. Orest Rudzik in Ontario; Dr. Lou Melosky and Terry Prycbitko in Manitoba; Dr. Dmytro Cipywnyk in Saskatchewan; Dr. Roman Petryshyn in Alberta; and John Stashuk in British Columbia. (More details are provided  in the UCC document Building the Future: Ukrainian Canadians in the XXI Century.)

One of the major Canadian leaders in the area of education and multiculturalism is Dr. Manoly R. Lupul of Alberta. Under his leadership, the government of Alberta amended its School Act in April 1971 to permit instruction in languages, together with English and French. As a result, Alberta was the initiator of the partial-immersion {bilingual) Ukrainian language program starting in 1974. The program has since become a model for other provinces and ethnocultural groups and is currently used in Manitoba and Saskatchewan.

he national level, in 1972, a Minister of State for Multiculturalism was appointed and in 1973 the Department of the Secretary of State began to operate the federal Multicultural Grants Program. Parliament passed the Canadian Human Rights Act in 1977 to provide legal safeguards against discrimination based on race, origin or religion.

In 1982, equality rights and multi­culturalism were entrenched in the Constitution Act, in sections 15 and 27 of the Canadian Charter of Rights and Freedoms. Laurence Decore, who was at the time the National Chairman of the Federal Advisory Board to the Canadian Multicultural Council was instrumental in seeing section 27 included. Today sections 15 and 27 of the charter read as follows:

The government of Canada took the next step in the evolution of multiculturalism by enacting the Canadian Multicul­turalism Act in 1988. It is based on the following three principles: that Mult­iculturalism is a central feature of Canadian citizenship; that every Canadian has the freedom to choose to enjoy, enhance and share his or her heritage; and that the federal government has the responsibility to promote multicul­turalism throughout its departments and agencies. Most recently, an Act to es­tablish the Department of Mult­iculturalism and Citizenship was passed (1990) by the Parliament of Canada.

Ukrainian Canadians have played a major and significant role in the development and dissemination of the values of multiculturalism and have always considered that all ethnocultural groups must be given an opportunity to contribute to the overall Canadian cultural mosaic, thus crystallizing a unique Canadian identity. 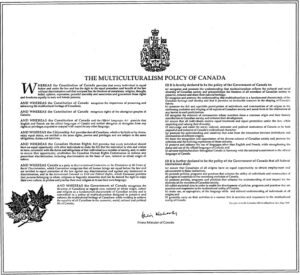 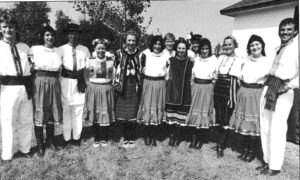 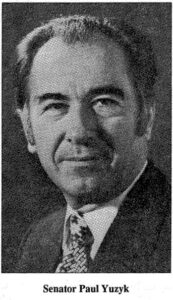